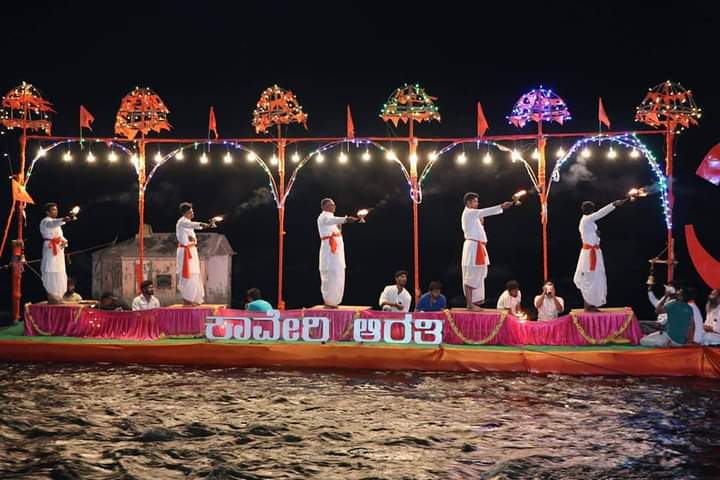 Cavery Aarati was performed on Oct 17, 2021 Sunday evening at Snana Ghatta in Srirngapattana where the Goddess was propitiated on the auspicious ‘Tula Sankramana‘. The holy Theertodbhava occurred at Talacauvery, the birth place of the river.

Yuva Brigade had organized the event where hundreds of residents took part. A giant stage was set up in the middle of the river and the ceremonial aarati was performed amidst chanting of hymns and playing devotional songs. As the Aarati was performed on the stage, the banks of the river were impressively lit and devotees had brought their puja materials to participate in the event.

The rituals were led by vedic scholar Dr. Bhanuprakash Sharma who narrated the story of the birth of the river and her course. Sri Abhinava Halaswamiji of Halaswami Mahasamsthana, Hirehadagali stressed the need to conserve Cavery in the wake of wide spread destruction of the environment of Kodagu.

Yuva Brigade mentor Sri Chakravarthy Sulibele said that Yuva Brigade would make the event an annual affair and from next year, four days prior to the event, volunteers would clean Paschimvahini and then perform the rituals. A week ago, our volunteers had fished out five tractor loads of garbage from Paschimvahini .

Impressed by the event, the team members were invited to Tripura for a similar feat at Mata Tripureshwari Temple and invitation was from Chief Minister Biplab Kumar Deb. Yuva Brigade volunteers went to Tripura to participate for two-day aarati at Kalyan Sagar lake as part of deepavali celebrations.